Emojis at Work: Acceptable or Not? 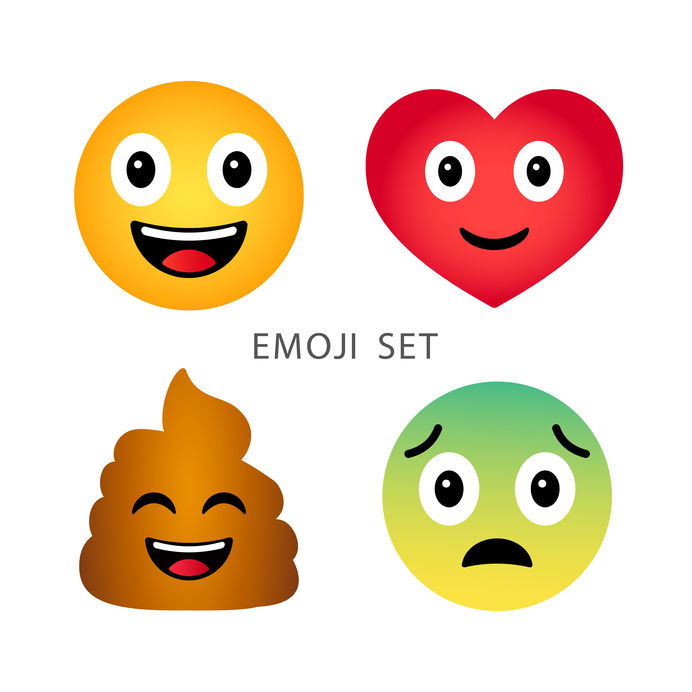 Not that long ago, emojis were simply typed faces on a keyboard using colons and parentheses. Today the selection has expanded to everything from gender and race appropriate motions and faces to little piles of smiling poop. In a society where entire conversations can now take place via emoji, what is the line between appropriate and unprofessional when it comes to emojis in the workplace?

The Good, The Bad, and the Misinterpreted

Even in a professional environment, there is a time and place for emoji use. However, there are a few things to be aware of before you send a blown kiss at a coworker.

First, remember that every emoji is open to the interpretation of the recipient. While you may be someone who sprinkles sparkly hearts liberally through typed conversations without a thought, those little messengers of love can be taken in a way you weren’t intending by a colleague.

The same goes for emojis used in a joking fashion being taken seriously, or icons that are completely meaningless to one person being interpreted with a hidden message by someone else.

While it may seem harmless, entire lawsuits have been spawned and won based on emojis as evidence of harassment or discrimination. That little winky face that you see as cheeky and light-hearted might look more like sexual harassment to the coworker down the hall and can and will successfully be held against you in a court of law.

Further, the selection of skin colors now available has caused major issues for companies and organizations, such as the officers who were suspended when they posted a photo of a gun being aimed at an emoji of a black running man.

To make matters more complicated when navigating emoji use in a professional environment, many of them have double meanings.

For instance, is that eggplant emoji about the vegetable or something entirely unrelated to food? If you’re sent the dancing women with bunny ears, are you being invited to an awesome girls’ night out or is it a reference to the Playboy bunnies they seem to be modeled after?

While some double meanings are well known, others are more obscure and not as easily recognizable. Besides being taken in a way you didn’t mean, there’s the added layer of unintentionally sending an emoji you weren’t even aware had an alternative meaning.

Additionally, different emojis carry different significance in other cultures. In the United States, for instance, the hands up emoji references praise, while in China it’s considered offensive.

Besides being misinterpreted, studies have also shown that people who use emojis in a professional environment are seen as less intelligent. While emojis add flavor or personality to emails and texts, using the symbols instead of their respective words can make you seem less competent to coworkers.

Since your professional image is a huge part of advancement in any career, knowing when a well-placed emoji will add to the context instead of making you appear less responsible is important. So, when is it acceptable to throw in those little conversation enhancers?

According to most sources, there are a few times when a strategically placed emoji can really help put words into context instead of being misread.

In situations where absolute professionalism isn’t a must, like short logistical messages, it’s perfectly okay to add emojis to your statements. For instance, as emails go back and forth, they often evolve down to simple one-liners that feel more like text conversations than work-related issues, and emoji use is acceptable here.

In situations where a tense moment has occurred, adding a small smiley to the end of your words can help assure the other party that everything is good and there are no bad feelings. As the words in texts themselves can sometimes be misinterpreted, any emoji that can help add the spirit of what you’re trying to relay is helpful.

Further, if you have a new coworker in your ranks, emojis can help ease them into their new professional habitat and show you are a friendly and approachable face in the office.

In most situations, it is probably best to leave emojis to conversations that aren’t really work-related or need some context to help with understanding. This can be hard when you’re used to having them as helpful little additions in your day to day texting. And to make it harder, there’s an emoji for almost every situation. There are now almost 3,000 official emojis - so many, in fact, that they have an official “Emojipedia” to catalog and explain them.

Despite their usefulness and the general feeling they bring to conversations, consider the recipient of your correspondence and how well you know their personality as well as the tone you’re trying to set before incorporating any smiley faces into your messages. Additionally, take care to stick to a small range of emojis that are straightforward and not easily misread.

What do you think? Are emojis acceptable in the workplace, or better left to personal conversations?